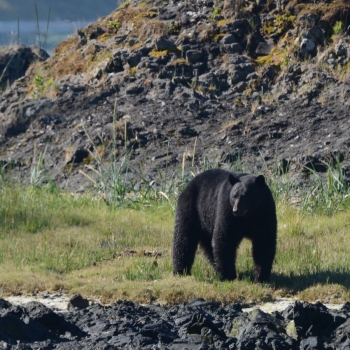 I will be posting so much to this blog over the coming weeks and months… all the while, sorting through my many photos and starting to write the book! I am really eager to get to work on it – everything went so well on the expedition, from weather to wildlife experiences to our investigations of the history and meetings with the Nuu-chah-nulth people along the way.

Here’s a very quick overview of what we did:

We flew in to Rugged Point, a very tiny and hard-to-access provincial park at the southern entrance of Kyuquot Sound, on Atleo Air. From here we hiked down the coast – here we are, starting out:

The first days were beautiful and pretty easy, mainly following beaches and rock shelves, and we saw LOTS of big bears! Our last two days were rough though – we had trouble making it around a big rocky point and got delayed by a day, and then had to cross a huge and unexpected washout along a logging road (our only road of the entire trip) to make it to Port Eliza. Kimberley from Nootka Marine Adventures met us there and boated us across to Nootka Island.

We got dropped on the northern end of Nootka Island. We had not seen anyone at all on the Tatchu section of the trip – on Nootka we saw a few groups of hikers, but not many!

Again, we had great weather – dry and sunny – but there were many days with a strong northwesterly blowing all day and all night. It was pretty fatiguing, being out in the wind all day long (not to mention trying to cook on the beach without getting sand in your food!) but it didn’t affect our travels the way it would have if we got those winds on the kayaking section. (Fingers crossed there!) 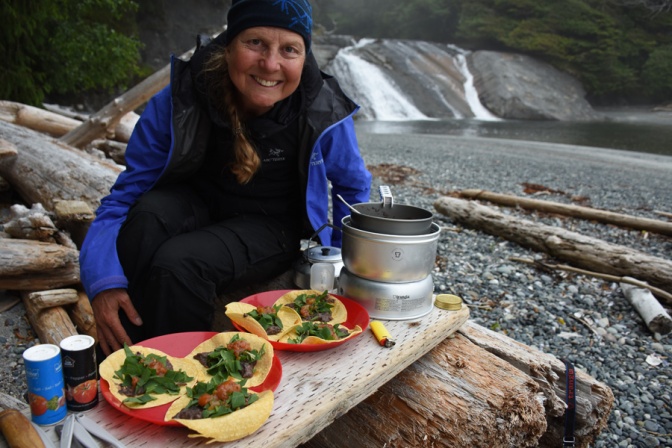 We foraged for foods along the way – collecting seafoods like mussels and urchins and gooseneck barnacles along the shorelines, and getting lots of fresh greens such as purple nodding onions, sea asparagus, sea plantain and lambs quarters to add to our lunches and dinners.

We spent several days at Friendly Cove, where I spent time working with Ray Williams, who shared some of his oral history about the early encounters between his people, the Mowachaht, and the Spanish, British and Americans. Then Ray and his son Daryl transported us across to Hesquiaht.

This was our longest hiking section – 10 days – so we started out on this with with very heavy packs (we had just replenished at Friendly Cove – I had sent a food drop up in the care of Ray).

At one point, we ended up camped near a dead sea lion on the beach (we actually did not see it there until after we had set up camp!), which meant wolves came around it during the night to feed. Dave and I got up early that next morning and were very lucky to see three of them running away – appropriately wary of us, which is great. One returned later to feed some more:

We also saw lots of shorebirds along the Hesquiaht coast, already migrating southward from their arctic breeding grounds. We did hit a little rain along this section, which made travel along the extensive boulder shelves very dangerous – super slippery and high risk of injury, so our progress was very slow. We ended our hiking section at Cougar Annie’s Garden, Boat Basin, at the top end of Hesquiaht Harbour.

We picked up and assembled our folding kayaks at Boat Basin, spending two nights there visiting Peter Buckland and touring the historic gardens. Peter had just finished constructing a “foot spa” where the creek flowed out over the beach, which we eagerly used to clean ourselves up!

We stopped at old Hesquiaht Village (most of the Hesquiaht people moved to Hot Springs Cove in the 1930s, but we visited Dave and Dianne Ignace and family, who still live there, for a night). Then we continued paddling down the coast, fortunate that those strong winds from the weeks before had totally died down, making for some lovely paddling on glassy seas – but struggling with a very big swell coming up from some raging storm somewhere in the southern hemisphere making for very big surf (challenging for us to get to shore). 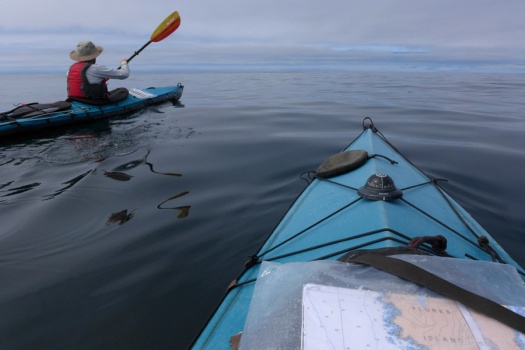 After over a week in the kayaks, we landed pretty much on schedule on Chestermans Beach, Tofino just down from the Wickaninnish Inn – where Managing Director Charles McDiarmid and staff greeted us with champagne!

So that’s the trip overview. There is SO much more to tell and so many more photos and video clips to share… so keep coming back and checking in, I am working on it! And, once again, thanks again to our wonderful sponsors who supported us in so many ways, enabling me to transform the Secret Coast Expedition from a wild idea to a reality!